A Participant Observer: Dealing with Political Voice in William Kentbridge's "Drawings for Projection" 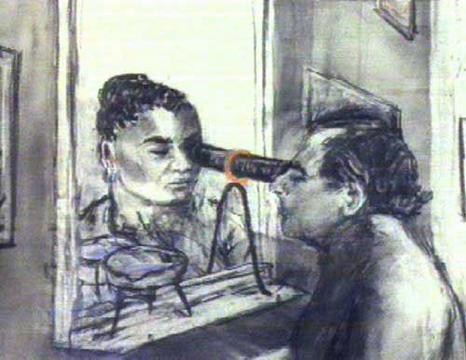 William Kentridge’s works are overtly political; his entire oeuvre revolves around South Africa’s troubled history and torn identity. But as an affluent, educated, white male, can he really give a voice to the oppressed? The question has to do less with legitimacy (i.e. does he have a right to do so) and more with the inherent difficulties that accompany the attempt to represent the ‘other’. Can the act of representation avoid necessarily obliterating the  individual features of the “other”, and therefore implicitly patronizing him? And, can it be done while maintaining the tension that lies in the artist’s double role as a participant and an observer?

It is important to note that knowledge of an artists’ political agenda or the context of his works cannot resolve these issues. The fact that Kentridge was born in 1955 in South Africa to a family of German Jewish immigrants, who practiced law and were prominently active in the struggle against apartheid, may assure us that politically he is on the ‘right’ side, but not much else. The artist’s political persona, although indicative of his sincerity, can do little to explain or resolve the inherent distance between him, the work, and its subjects, in this case the silent black majority. Any attempt to appeal to the artist’s political agency as capable of bridging this distance culminates in mere apologetics.
Kentridge seems to be well aware of what is at stake, and he deals ingeniously with these problems in his film series “Drawings for Projections”, using a set of artistic and narrative devices he has developed.  These are meant foremost to highlight rather than resolve the double status (and double moral stance) of the artist as an observer who is also a participant in the tragedy of the Apartheid regime.

The “Drawings for Projection” series begins in 1989 with Johannesburg 2nd Greatest City after Paris (1989, 35mm, 8′) and spans over a decade.  The works are shot in 16mm film, using a “primitive” stop-motion animation. Kentridge draws his image on wall-size sheets of paper, photographs them, and then alters the image, erasing and adding over the same sheet of paper. The drawings therefore bear the traces of erased images, allowing us to see, or believe we see, the artist’s continuous thought process and the passage of time. This technique -the static images that bear the presence of the passing time –  present a paradox that is most telling about Kentridge’s fascination with excavating the traces and marks of the past in the present moment.

Although the series was not created as a narrative sequence, according to Kentridge, in retrospect he realized that each independent film represents a different moment in the unfolding of the political history of South Africa. Indeed, watching the various films in the series in chronological order seems to create a subtle narrative, as an understanding of the recurrent themes and characters is gradually accumulated.

At the centre of most films are two characters: Soho Eckstien, a Real Estate developer, always depicted in a pinstripe suit, and Felix Taitelbaum, a dreamer, anarchist, and an artist, always portrayed naked. Both Felix and Soho physically resemble Kentridge himself (Felix from the beginning and Soho more and more so as the series progresses) and therefore each other.  Set against the background of the vast flat wasteland around Johannesburg, the films depict episodes from the lives of the two characters in which the public sphere, a locus for ecological and human disaster, is correlated with the inner worlds of the characters. In most episodes Soho is the one who sets things in motion, he is an entrepreneur in every sense.  Felix is having an affair with Mrs. Eckstein, Soho’s wife, but other than that he serves as a sensitive observer who is trapped in non involvement and impotence in the face of the atrocities.

The characters, who might be seen as standing  for the entire history of the European presence in South Africa, also represent a constant inner conflict (as well as an external class struggle) which becomes literal in Johannesburg 2nd greatest city after Paris. This film ends with a scene in which Soho and Felix rising above the horizon, clashing in a struggle depicted in mythical terms. The outcome of this struggle, however, does not seem to alter the situation much, as convoys of disillusioned blacks crossing the flat land indifferent to the battle.

Aware of the problem of speaking in the name of the oppressed, Kentridge turns to self reflection as the only morally adequate way of dealing with the reality that surrounds him. When he gazes inwardly, the wasteland around Johannesburg turns into an internal landscape, a setting for an unresolved and soul-splitting conflict.
This, however, is much more than a mere allegory of an internal struggle. The spilt between the two characters which were created in Kentridge’s image and yet are not identical to him (he is neither nor the two together) enables him to point out that art can occupy a stance in which it is both part of the story and yet at the same time far
removed from it. This ambivalence, he seems to claim, is not something that can be resolved, only be brought into awareness. Therefore, for Kentridge, pointing out the moral dilemma involved in the participant-observer stance – becomes itself a moral goal.

In Felix in Exile (1994, 35mm film 8’43”) we find Felix alone in a bleak hotel room in Paris. His sole possession is a suitcase filled with empty papers, and his uneasiness and sorrow are prevalent. As he attempts to shave, his reflection in the mirror is erased and the image of an African woman, Nandy, appears instead. She hands him images she has drawn, and the room is soon flooded with a wave of pages with her drawings of murdered people (the film was made in 1994, after the first post apartheid election, and the images are of victims of the massive killing that took place right before that).

The picture of South Africa that appears in Felix in Exile are heavily mediated- they are presented in a world of reflections, of drawings of photographs, of second and third order representations. This emphasis on visual mediation was interpreted as linked to the heavy censorship during the apartheid regime (for instance, during the 80’s all images of violence or public disturbance were banned from public view), however, it can also be seen as a commentary on the role of the viewer. As the film unfolds, we, the viewers of the film, are exposed to the harsh images at exactly the same moment when Felix sees them, and as such we become witnesses as well. By equating our experience with Felix’s, Kentridge places us all in the same position which is marked by the impossibility of having a pre-mediated, ‘original’ image. Felix’s physical displacement becomes a metaphor for an internal exile, in which one can never be at home, if that means having an intermediate direct contact with reality. Under such circumstances the idea that art has a privileged access to reality in which the artists is capable of conveying the ‘real’ voice of the oppressed, seems unfounded. In this light Kentridge, rather than handing us a recollection of facts, is commenting on how our memory and vision operate, and makes us come to terms with our inability to have one truth, as long as we remain well aware of it.

A further inquiry into the role of visual mediation underlies Kentridge’s History of the Main Complaint, (1996, 35mm film 5′ 50″) in which Soho is lying in a hospital bed in a coma, surrounded by ten identical doctors who look like him. As the medical treatment is to no avail and they carry him to do an MRI scan for diagnosis. There, we practically enter Soho’s body and see ‘what goes on in his mind’, as the MRI images are transformed into a road map. We follow Soho driving through these inner roads (here again Kentrdige’s almost obsessive engagement with reflections becomes apparent, as all we see is mediated through mirrors, windows, etc) the journey ends abruptly when a pedestrian hits the car’s front window. His horrified face stares at Soho who wakes up all of a sudden in the hospital bed.

The film was made during the establishment of the “Truth and Reconciliation Commission,” which attempted to come to terms with the horrors of the past by organizing events, of an almost religious type, in which both the oppressors
would confess in front of their victims, and would gain their forgiveness and the amnesty of the state.
Here the visual mediation of the MRI serves Kentridge to comment on the role of representation in art and life and about the relationship between the individual and the communal responsibility for South Africa’s recent past. The fact that the knowledge required for the healing of the body is not given through the body itself but through its representation points out the power of visual mediation to convey a deeper, hidden, truth. Just as the recovery of the past is possible only through its subjective representation in the minds of the victims and oppressor, it is only via a representation of Soho’s own experience- induced by a community of healers – that enables him to regain consciousness. In this representation, however, the MRI scan is not readily readable and needs its interpreters and mediators, in this case, the artist itself.

Kentridge’s poetic yet highly political works succeed in commenting on
the situation in South Africa and at the same time has a bearing outside his immediate political context. By placing the personal in the forefront while the political seems to stay in the background, he manages to create a calculated illusion that the latter are merely coincidental and marginal. However, a closer look reveals the political to be the catalyst of all events, and inseparable form the personal. As the characters motives and interaction replicate the portrayed events, the personal becomes a reflection on the political and vice versa.

These issues are taken up, as demonstrated perfectly by his animation technique, through a thematic engagement with the play of memory and time and an investigation into the nature of art and representation. Kentridge, it seems, aims to place the artist’s point of view on the same level as that of the audience viewing the work, pointing out the necessary mediation and distortion inherent in any act of communication and representation. Political art, he seems to argue, does not offer a view from nowhere, immune from the biases and short sightedness of its audience. Its importance lies not in the pretence to convey certain realties, but in its being an inquiry, its ability to send both the artist and his audience into a process of self-questioning. Paradoxically, by manipulating his own images and turning the political engagement into a soul searching quest, Kentridge manages to avoid forcing his own vantage point as superior. Without overshadowing and obliterating the other, his artistic search and voice comes across as both sincere and legitimate.

Whose Voice is this Anyway?

Whose Voice is This Anyway?

The Politics of Aesthetics Between Bil'in and Tel Aviv

A Participant Observer: Dealing with Political Voice in William Kentbridge's "Drawings for Projection"

Facing Klone: The Address of a Voice in Tel-Aviv's Street Art

Act of State: A photographed history of occupation

Any Women in the Directors' Room?

In the Middle of What Exactly?