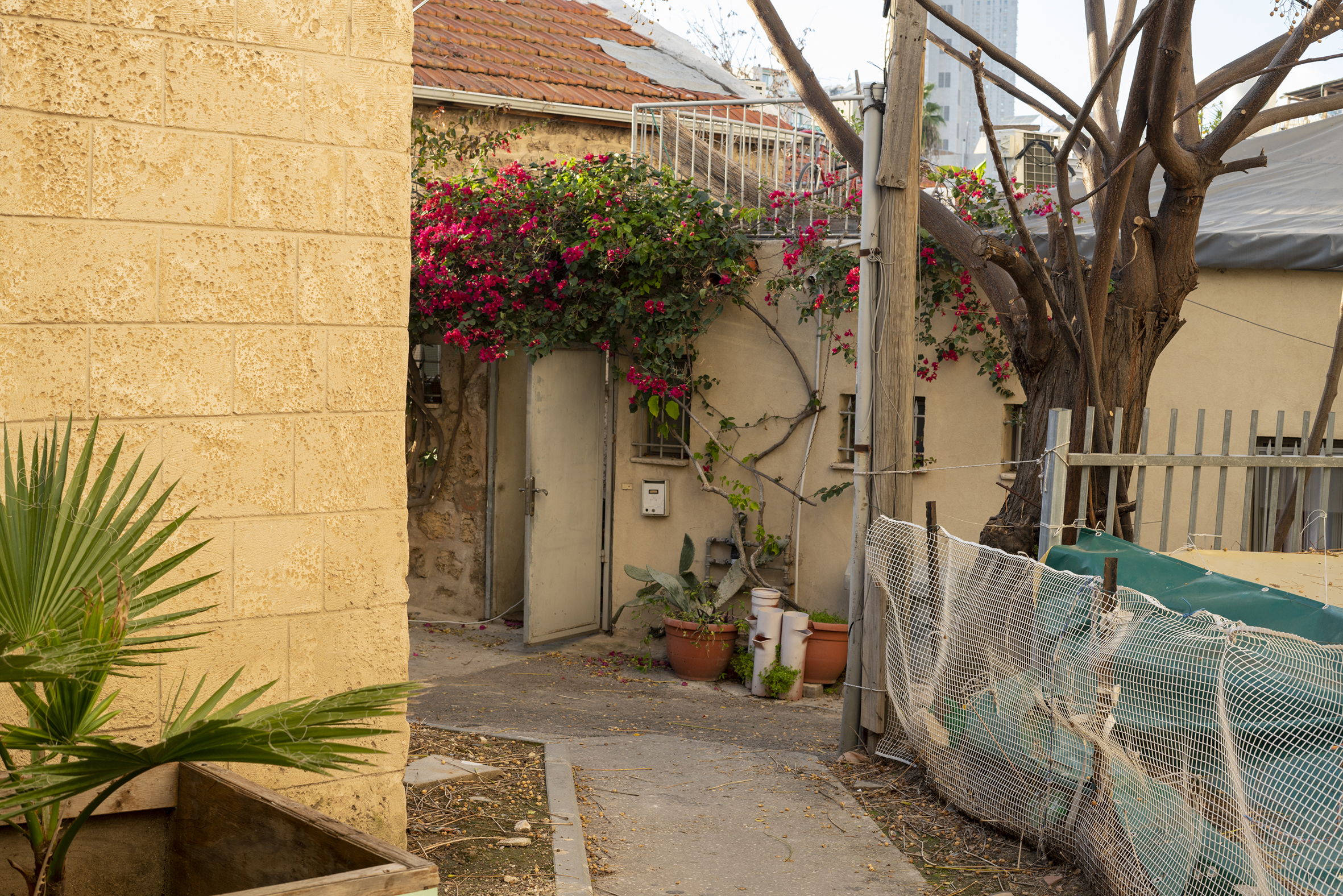 Sakhnat Daniet.[1] The pastoral appearance deceives us into thinking that we are in a different time and place than the busy corner of Herzl and Shalma Streets in today’s South Tel Aviv. Only the tops of towers protruding out against the blurred background bring us back to reality. While the original buildings of the sakhne have been renovated, they remain in place, preserving the original historic texture of the alleyway. In the empty spaces between the original buildings, additional structures have been built, mostly in the years following 1948. This is a vernacular settlement which preserves the spirit of the place.

The central structure, with its tiled roof, is an original building from exposed sandstone (‘karkur’) stone and a tiled roof made in Marseilles, France, probably from the later Palestinian period. In that period, at the beginning of the 20th century, it seems that the builders had greater economic means than the previous generation, standing out, as well against the earlier Egyptian foundations. After 1948, the then residents of these buildings were replaced by Jewish families of refugees and new immigrants. It seems that the present residents are sensitive to aspects of the place’s heritage in that they plastered the sandstone wall with sandstone  stone-lined plaster, thus preserving both their home as well as the feeling of continuity and authenticity. 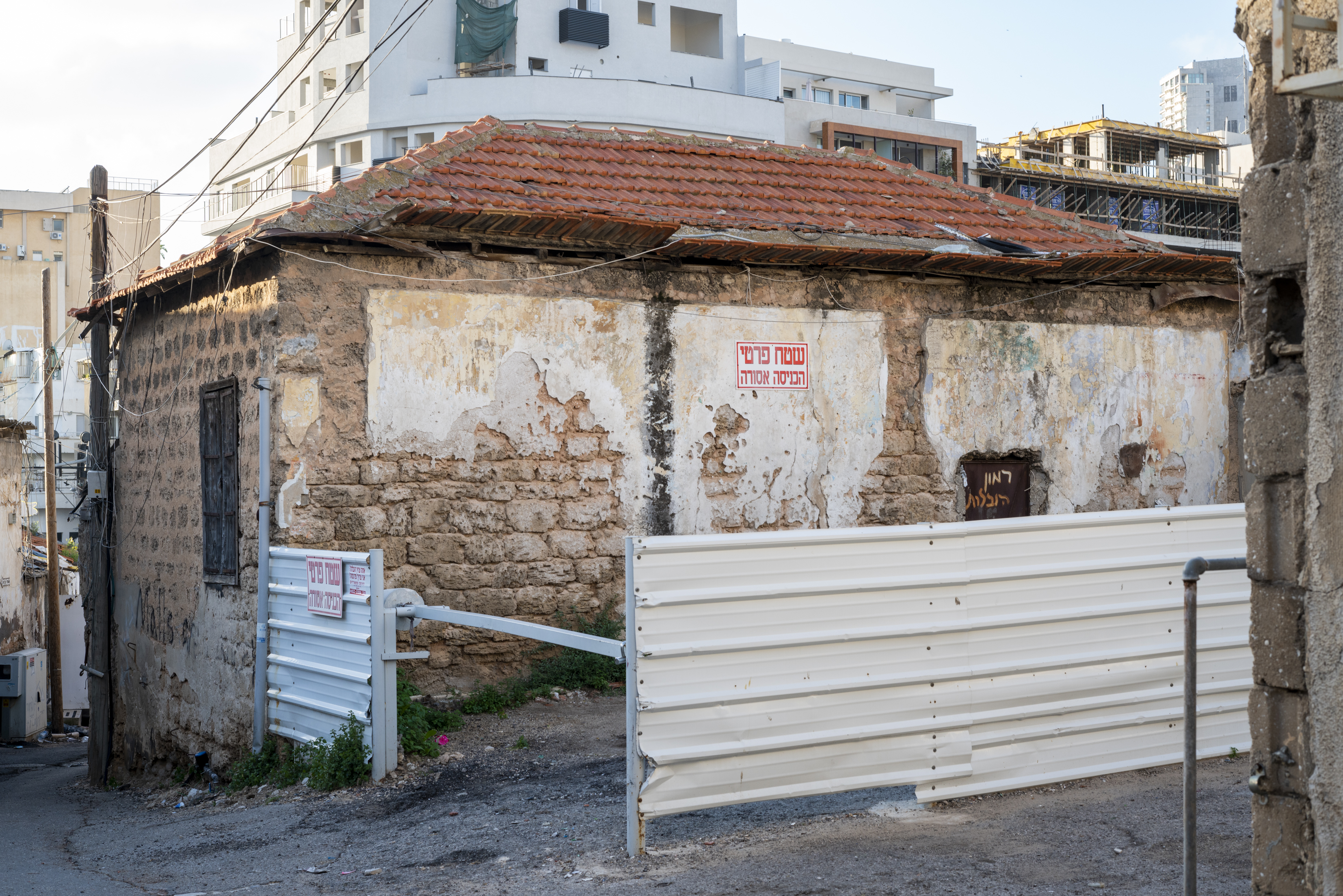 Sakhnat Daniet. Residential building from coarsely chiselled local sandstone stone with mortar between the joints. The external walls are not plastered, as is customary in the rural houses of the lower and middle class. The use of roof tiles (probably from the 1920s or 1930s), indicate the economic means of the owners. It is possible that the house originally had a flat roof with wooden boards and earth. These roofs required constant maintenance and were not suitable to the city’s working class, who moved to live in the sakhanot of Jaffa. Later on, an additional stone structure was attached to the house but did not survive, save for the plaster inside two of the rooms which was added over the stone walls of the original structure. It is possible that the additional construction was done with wood or bricks but without being integrated into the existing walls. The original wooden shutter indicates the simple, rural style, which served more to as a defense against strangers looking in, as opposed to shade from sunlight. The wooden shutter wings are completely sealed such that it is not possible to control the amount of light coming into the house, which is pretty dark in the first place.

Sakhnat Daniet. In the photo one can see a complex structure, with a number of spaces for different uses in the past and present. The stone walls are not plastered and indicate the rural character of the house. The impressive arched opening in the center leads inside via three original stone steps. The dimensions of this opening are not characteristic of rural houses here. It is possible that this was the entrance to a shop, a storage shed or workshop. Beside it is a smaller, narrow opening, characteristic of a residential structure. This opening is also raised five steps above the ground. The house was originally covered with a flat roof which was later replaced. That the construction style is different in every part of the house, indicates ongoing construction over different periods of time and a gradual expansion in accordance with the residents’ needs. Even after the ethnic cleansing following the Nakba[2], building additions were constructed, evidently for use as a workshop. Ventilation systems were installed in the roofs, which were made of metal or asbestos boards. Despite the changes, the structure managed to maintain its authenticity and as such grants its surroundings a kind of cultural significance. 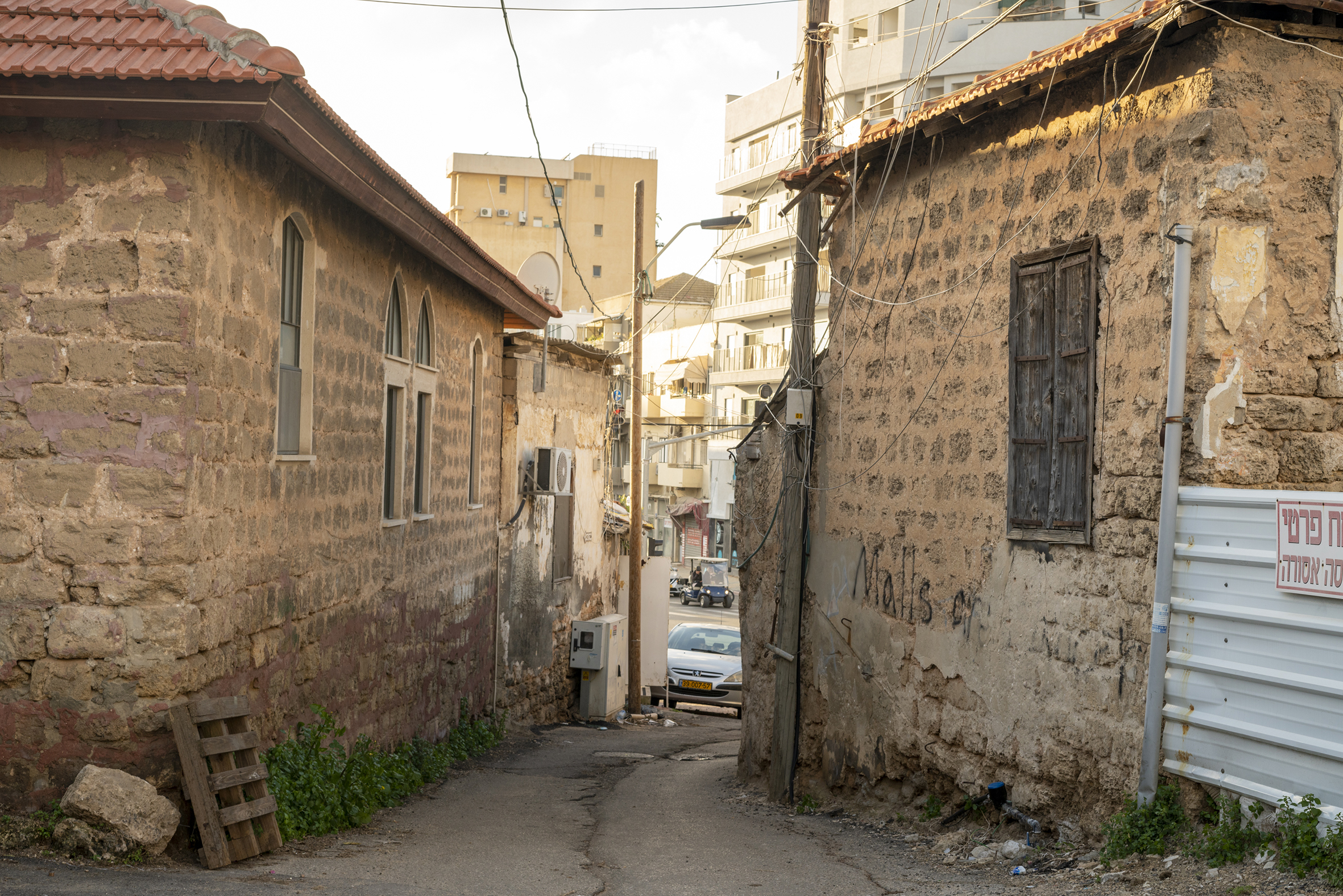 Sakhnat Daniet. In the original lane, which descends at a steep decline from the top of the village, original stone buildings are built into the slope. In the traditional world, homes were built relative to the slope and adapted to the topography, rather than creating flat foundations in order to build houses on a level surface. The house in the photograph is an original residence, whose ground floor is adapted to the natural slope and probably served as storage or a place for the household’s animals. It seems that the present inhabitants are well aware of their historic surroundings, as they sought to renovate the house while strictly maintaining its authenticity. The stone walls were kept exposed and not plastered over. The work was done by professionals with an understanding of preservation work and using carefully chosen materials. The windows were replaced but without the requested wooden shutters. The tiled roof is new but was built using the original roofing layout and tiles similar to the original ones. Here too, without planning (or licensing), a vernacular preservation of the house was carried out by its inhabitants who managed to maintain the spirit of the place and the values of its surroundings. 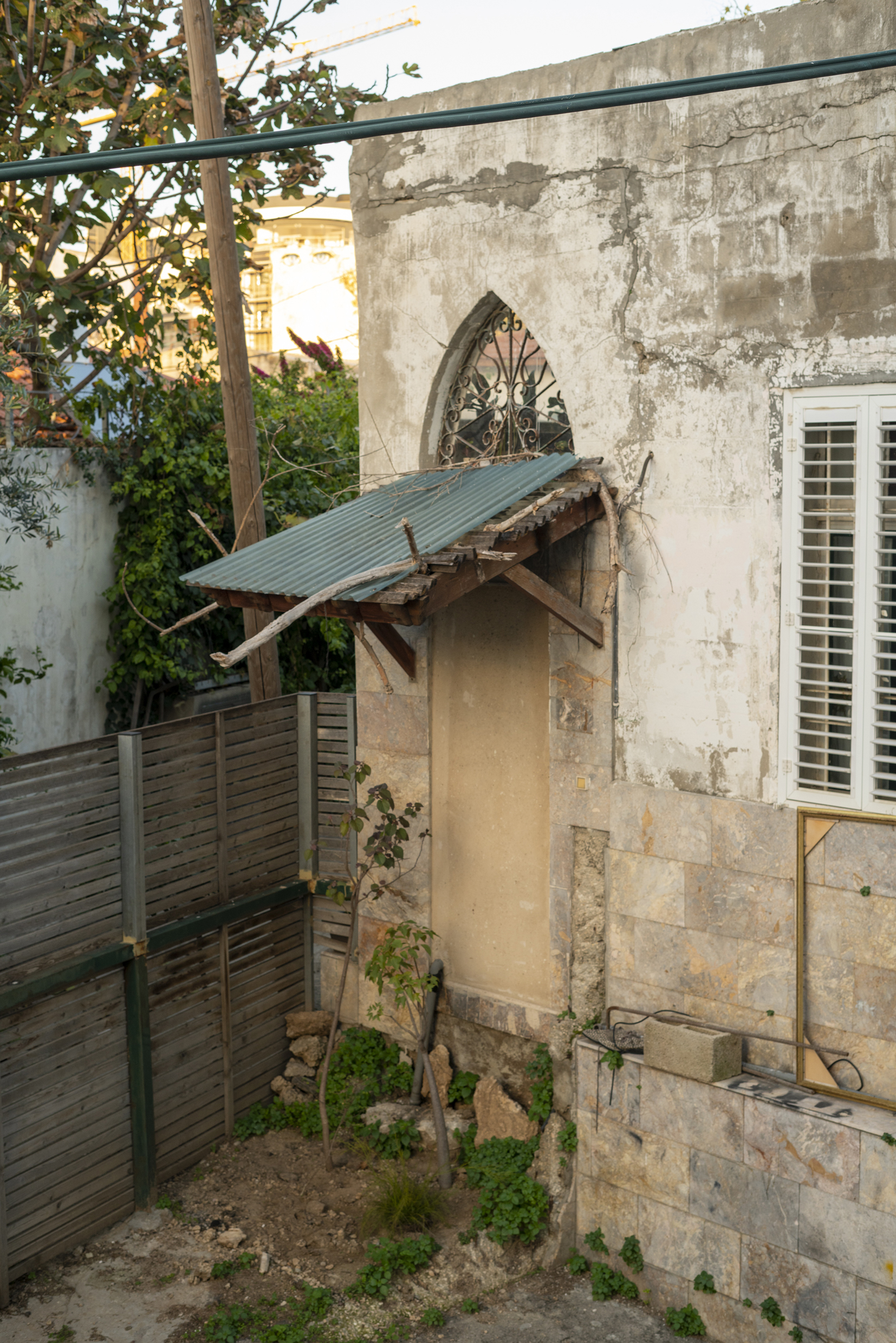 Sakhnat Daniet. View of the houses’ yards, some of them original Palestinian, and some relatively new. The walls and fences separate the houses’ courtyards and enable communication or sight lines between neighbors. The pointed arch with the stylish iron grille is one of the hallmarks of bourgeois Palestinian building, since the 19th century. This entrance beside the house marks the entry to an external staircase which leads to the upper floor, designed for the homeowners, characterized by a grand, central space. Before us is a central space whose construction was not completed as it is only built up to the first floor. Was it the events of the Nakba that prevented the owners from continuing construction of the house? Or did he become impoverished? We will never know, but it looks like in the twentieth century, the poor village became an urban suburb where new, bourgeois people came and settled. Since the top floor was not built, there was no need for a staircase. The stairwell attaches to parts of the house and is covered with a concrete roof. We can also see that the later roof is higher up than the main roof plane of the house. 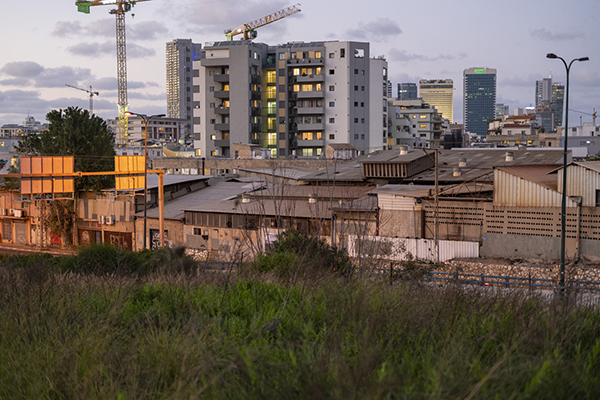 Sakhnat Abu Kabir. Three planes of development and embarrassment. Before us is the urban mix between what remains from the ruined, rural fabric of the sakhnot and the well houses of Abu Kabir, and the big city of Tel Aviv which is growing southward. This encounter occurs in industrial areas (of craft, small industry, storage, etc.) This buffer zone (whose days are numbered) constitutes a separate area but at the same time also offers possibilities for encounter between different populations. It seems that nothing will stand in the face of Tel Aviv’s accelerated development in building new residential neighborhoods at the expense of additional destruction of the city’s southern neighborhoods. In the foremost plane, wild vegetation grows, surrounded by barbed wire fencing. This is what remains from the core of what was Sakhnat Abu Kabir. In this space, all of the original houses were destroyed in order to “free up” the area to sell to entrepreneurs for development and construction, ultimately erasing the remains of the past once and for all. Farther back, the Tel Aviv towers of neoliberal corporations can be seen. The new construction is characterized by density and high-rise construction of residential apartments. Before us is a dynamic, ruinous process at the expense of the forgotten cultures of the past. In the central plane two initiatives intersect: one of destruction and one of destructive development. Undoubtedly the industrial area will also be erased in the not too distant future. 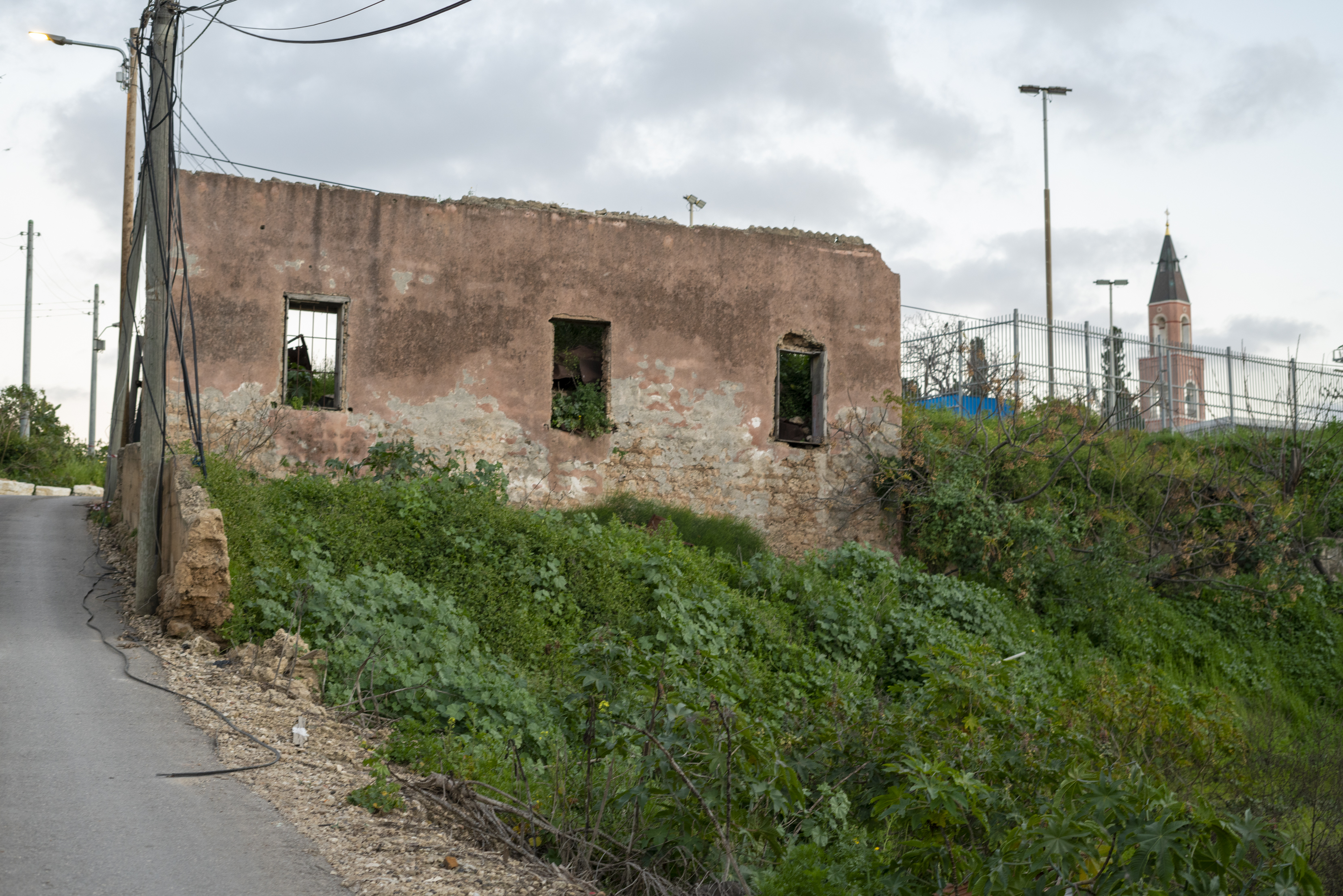 Sakhnat Abu Kabir. South of the densely built block of houses that were demolished, on the side of the road that rises to the east from Asim Bek Street (today’s Herzl Street), there used to be a modest, one-story house with a flat roof. Of the house, all that remains intact is one west-facing wall. To the front are three windows that overlook a courtyard surrounded by a stone wall, the remains of which can still be seen. To the South we can see the bell tower of the Russian church named for Tabitha, who was resurrected in the miracle performed by St. Peter. The house is not part of the dense block of sakhne houses. It was built separately and does not appear to have any signs of a pool or reservoir for irrigating the orchard. It is possible that the house was built at a later stage than the sakhne, but using similar technologies. The pink color of the plaster facade comes from a traditional mixture of plaster containing lime as well as crushed earthenware in order to give it hydraulic properties which strengthen the plaster and the stone. It would be interesting to know why this wall survived and was not demolished with the rest of the house and most of the sakhne’s buildings.

Sakhnat Hemed. Herzl Street descends south from central Tel Aviv in a straight, planned line until it reaches the historic Shalma Street which connected the center of Jaffa to the village of the same name. From there, Asim Bek Street continues south in a winding line, following the settlements in the area and the topography’s limitations. In the junction’s southeastern corner, on a low hill, the houses of Sakhnat Daniet were built. To the west, at one of the bends in the road and a little south, Sakhnat Hemed was built. On maps, the Sakhnat Hemed looks like it is one cohesive block, elliptical in shape, and bound by Herzl Street to the East and Shach alley to the West. The alley comes back around and connects to Herzl Street, delimiting the small block of historic houses. The houses built beside the road became commercial and craft buildings. The Gloska tile factory which moved here after ’48 likewise suited these uses.

To the article Behind the Well Houses by Matan Kaminer

[1] Around commercial coastal towns, and near the orchards that became their headquarters, immigrants built houses in clusters called sakhnot, (one sakhneh, multiple sakhnot), probably from the Egyptian pronunciation of the word “tkhena” meaning “barracks”.

[2] Meaning “catastrophe,” ‘Nakba’ is the Arabic term for the destruction of Palestine in 1948, and the permanent displacement of a majority of the Palestinian people.

Behind the Well Houses: The Saknat of Abu Kabir / Matan Kaminer

The Garden behind the City / Meital Katz-Minerbo