Reaching for the Heavens, Pulled back to Earth / Noah Simblist

I first met Ezra Orion in the summer of 1990. It was about an hour before dawn at the Har ha-Negev field school, just outside of Mitzpeh Ramon. I was a part of a group of American and Israeli teenagers on a seven-week summer program and we milled about the cafeteria drinking tea and coffee to wake us up and keep us warm. While it was summer, the desert air was cool. We slowly filed into busses that pulled out into an inky expanse that I soon realized was Makhtesh Ramon, a 40 kilometer wide crater.

The bus stopped. We got off and gathered around the headlights, distributing jerry cans filled with water. Orion stood immobile, watching us and periodically glancing at the soft blue glow on the horizon. I didn’t know it at the time but he was anxious, worried that our timing was off. We were at the foot of a mesa and soon he led us single file on a long silent walk to the top. Orion was a tall towering figure and walked with a slow deliberate gait. We joked that he seemed like Charlton Heston’s Moses in shorts and a T-shirt. Every now and then some teenagers would start whispering to one another and he would look back towards them and with a wordless piercing stare remind them that this wasn’t meant to be an ordinary hike. The sky brightened slightly from indigo to cerulean until we arrived at the top and found ourselves looking over a long line of rocks that ended precisely at the point where the sun was rising, the edge of a bright orange bulb just barely peeking over the horizon.

Orion timed this walk as a performative experience of site-specific sculpture.[1] It combined an arrangement of rocks, the mesa, the crater, sunrise, and the slow shift from darkness to light. While Orion was an atheist, there seemed to be strong metaphysical underpinnings behind his intention for this work. The pilgrimage up the mountain, the reverent silence, and the cosmic intersection between earth and the heavens all combined to create the work. The line of rocks separated itself from the surrounding disorder, a seemingly Cartesian gesture, but one that didn’t privilege form over formlessness. Instead, Orion seemed to want a relationship between the two. 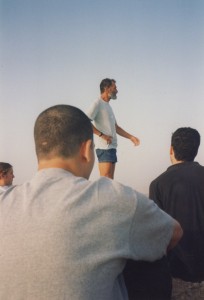 Later that day, after we trekked down and were driving back on the bus, we passed some Neolithic rock formations and Orion pointed them out. He seemed intent to make a connection between his gesture and theirs. For him, this made his work timeless and universal. The act of making was a trace of humanity, willfulness made manifest through the transformation of nature’s surface.[2]

Over the course of the next ten years I made this trek with him a number of times. But I also experienced other works, and once he gave a walkthrough of a mini museum in a converted bomb shelter at Sde Boker, the kibbutz in the Negev where he lived. The part of this museum that he was most excited about was a series of projects that he did in collaboration with NASA. One was an unrealized proposal to create a line of rocks, like the one in the Negev, on the surface of Mars, using a robotic rover to make the sculpture. Another was a series of laser beams that launched from Tel Hai towards the Milky Way, creating a sculpture that was a billion kilometers tall.

There are aspects to this work that are deeply steeped in modernism. Brancusi’s Infinity Column (1938) was a pivotal work for Orion. But the spirit of the space works reminds me more of Kasemir Malevich whose 1921 essay “Futurism-Suprematism” essay opens with the following:

In the future not a single grounded structure will remain on Earth. Nothing will be fastened or tied down. This is the true nature of the universe. But while each unit of matter is a singular part of nature, it will soon merge with the whole. This is what Suprematism means to me – the dawn of an era in which the nucleus will move as a single force of atomized energy and will expand within new, orbiting, spatial systems.[3]

For Malevich, this future was imagined through abstract representations. But for Orion, the unfastening of sculpture from gravity, and the earth entirely, was the future made manifest in the present. But contrary to Malevich, this wasn’t predicated on the avant garde destruction of the past, for Orion, a laser shot into the universe was a vector of human will that drew on a teleology of thousands of years of history.

Interestingly, in all of my years going on these walks with Orion, he never once mentioned another artist. It was as if his work, like the stones that he worked with was a product of geological time, the natural outgrowth of “history” in its most abstract form. So, one day, after his tour through his museum at Sde Boker, we sat eating lunch in the dining hall. I asked him about possible influences and he told me, begrudgingly, about his education in the UK and his interest in land artists like Richard Long. I also asked him about US artists like Robert Smithson, Michael Heizer or Nancy Holt and he seemed perfectly conversant in US and British forms of land art and earthworks. But he was more interested in a timeless ahistorical view of his work that existed outside of art discourse.

This desire for a certain kind of purity and the utopian framing of art as an expression of and medium for the human spirit’s transcendence of base reality falls into similar problematics as some of the twentieth century high modernism. First, the lack of acknowledgement of precedent creates the myth of originality. Second, this attitude embraces the idea of art as autonomous from social histories, except for highly selective references to premodern cultures. Finally, it assumes that by retreating away from cosmopolitan cultural centers to the desert that this newfound landscape of the frontier is virgin territory. For instance, when Michael Heizer left New York for the Southwestern US and created Double Negative in the Nevada desert, he displaced 244,000 tons of rock to create two trenches on either side of a canyon. Both the scale and the context were radically different from any kind of minimalist sculpture that would have been possible in New York, but this reveals an attitude in which a place is seen as the inverse of one’s own context. In the US this draws from a frontier mentality of settler colonialism in which the West seemed like many from the East as a blank slate. But this mentality ignored indigenous cultures and ecologies.

If we compare Orion to this mentality we can also see a colonial attitude in his works to the Negev desert. But in the context of Israel-Palestine colonialism is inflected with Orientalism and Zionism. Like Jewish artists from the early twentieth century in Palestine associated with the Canaanite sculpture movement such as Yitzhak Danziger, Orion wanted his practice to be a part of a lineage of indigenous sculptural practices that were a part of the land. When he pointed out the Neolithic structures in the Negev, he was articulating a romantic connection to the land that was in line with Zionist forms of orientalism that looked at the Land of Israel as an imagined space replete with ancient myths and mystery – qualities that are Western projections.

Looking back on my experiences with Orion, I can’t help but feel like there was something beautiful about the performativity of his utopian sculptural practice. But at the same time, it was somewhat overwrought with metaphysical ambitions and glossed over anything other than the geological history of the place in which he worked. His orientalist approach to the historical and discursive contexts of his work smacks of a retrograde form of colonialism. He was a classic kibbutznik, steeped in a settler mentality, yet oblivious to its political and social problematics. In retrospect, the chase for the perfect moment, when design and nature align at the crack of dawn seems quaint and willfully ignorant of the ravages of occupation.[4] If there is to be a recuperative history of Ezra Orion, someone whom I think is a very interesting artist, it must also be written with a comprehensive art historical methodology that includes its social and historical contexts, not just the ones that he wanted to highlight.

[1] Miwon Kwon lists three paradigms of site-specificity: phenomenological/experiential, social/institutional, and discursive. The first model extends from minimalism into the formal qualities of space and the relationship between a work of art and site.  The second model grows out of institutional critique and other forms of conceptualism focused more on the social qualities of a space. The third calls attention to discourses within a given place. Of all of these Orion’s practice is most aligned with the first and as I argue below, an analysis of his work should account for the second and third as well. Miwon Kwon, One Place After Another: Site Specific Art and Locational Identity (Cambridge, MA: MIT Press, 2002)

[2] Lucy Lippard makes a similar comparison on her study of land art and earthworks. See Lucy Lippard, Overlay: Contemporary Art and the Art of Prehistory (The New Press, 1995)

[4] For a useful meditation on the effects of occupation on the Negev see, Eyal Weizman and Fazal Sheikh, The Conflict Shoreline (Göttingen, Germany: Steidl, 2015)

Astro-Chasms: A photographic perspective of what’s been done between Mars and the Negev | Rotem Rozental

Reaching for the Heavens, Pulled back to Earth / Noah Simblist

Into the Wild: The American Desert and the Lie of Land Art / Meital Raz